I have to say I think I'm both fan girling and girl crushing on Veronica Roth right now. She's just awesome. See her post on ARC Hunt.
Posted by Jo at 18:39 No comments: 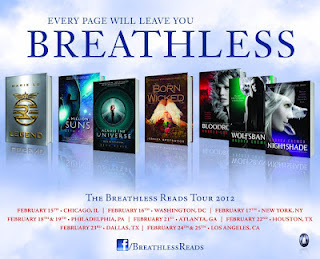 I just found this, and I'm kind of new to the book blog world, I haven't read the books yet. I did start Legend the other day though, and I'm loving it so far. So, go, check it out.
Posted by Jo at 08:12 No comments:

As always, I'm a bit late, and just found this. But do what I did, and GO CHECK IT OUT. If you like dystrophian, that is. 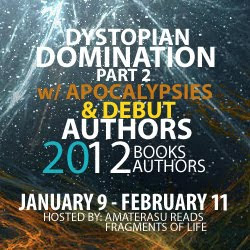 "In the violent country of Ludania, the classes are strictly divided by the language they speak. The smallest transgression, like looking a member of a higher class in the eye while they are speaking their native tongue, results in immediate execution. Seventeen-year-old Charlaina has always been able to understand the languages of all classes, and she's spent her life trying to hide her secret. The only place she can really be free is the drug-fueled underground clubs where people go to shake off the oppressive rules of the world they live in. It's there that she meets a beautiful and mysterious boy named Max who speaks a language she's never heard before . . . and her secret is almost exposed.

Charlie is intensely attracted to Max, even though she can't be sure where his real loyalties lie. As the emergency drills give way to real crisis and the violence escalates, it becomes clear that Charlie is the key to something much bigger: her country's only chance for freedom from the terrible power of a deadly regime."


I just loved this book. Start to finish. The world she writes about was easy for me to understand and it didn't take long before I started to think about the injustice of their system. Being interested in laungages, the way to use it as a weapon, to keep classes apart, is just brilliant.
However, even though I would love to know what's going to happen to them all, I felt like this book is good on it's own. I'm not sure a sequal is necessary, and I'm afraid it won't be good enough and kind of ruin it. Let's hope I'm wrong.

Also, extra special THANK YOU to Joy for having a great giveaway, and sent me this book.
Posted by Jo at 11:15 2 comments:

Since I just started this blog, I have a few books to catch up on reviewing.
So, this one, will be 3 in 1.

The first book I read by mari jungstedt was

"Swedish crime at its best---dark, atmospheric, and chilling

The island of Gotland is in the middle of a busy tourist season and getting ready for Midsummer, the 4th of July of Swedish holidays, when a young woman and her dog are found brutally murdered. The dog has been beheaded and is missing a paw; the woman is naked, covered in gruesome axe wounds, and her panties have been stuffed in her mouth.
What looks like a crime committed by the victim's jealous husband keeps the local police force on their toes. Then a second victim is found. A serial killer terrorizes tourists and locals alike, and Inspector Anders Knutas has to face additional pressure from the media and local politicians who are worried about bad PR for the island.
In his quest for the murderer, he is aided by Johan Berg, an intrepid young journalist from Stockholm who has been sent to cover the incidents and who gets involved with Emma, one of the first victim’s close friends. Three women die before Knutas and Berg, each approaching the case in their own way, finally close in on the killer, who has always, until now, been the one unseen by everybody.
Jungstedt has written an atmospheric and exciting first mystery in clear, unadorned prose, in the tradition of Henning Mankell, Håkan Nesser, and Karin Fossum."

Being a fan of Camilla Läckbergs books, I thought I'd give this, also Swedish author, a try. Her stories take place on an island, east of Sweden. I've been there once, a few years ago, and it's amazong how the nature, and in someway also the people, are so different there than on the main land.
The story got me hooked pretty fast. Her way of writing is easy to follow and I felt like I knew the people pretty fast.
When the book was finished, I thought, huh? That's it? It felt like the story kept on going, and then it was just a quick ending.
It's a good book. Worth reading for sure, and I do want to know what happens with all of them in the future.

Second book in this series is called

"It is winter on Gotland, and fourteen-year-old Fanny is missing. She had no friends to speak of other than the horses she took care of at the local racing stable, and seems to have been an unhappy and isolated teenager, the daughter of an absent Jamaican musician and an instable Swedish mother. Is her disappearance somehow connected to the recent brutal murder of alcoholic photographer Henry Dahlström, who had won a large sum of money at the racetrack right before his death? Inspector Anders Knutas and his team investigate under pressure from the media.
Fanny is finally found, strangled to death and left on a lonely heath, covered by moss and branches. At the same time, grainy but explicit photographs of the girl with a stranger are discovered, hidden in Dahlström’s darkroom. Intrepid TV journalist Johan Berg, sent from Stockholm to cover the two deaths, pushes the investigation one decisive step ahead while still trying to resolve his relationship with Emma, which has been simmering since they first met during the investigation into a series of murders on Gotland this past summer.
All evidence points to one of Fanny’s coworkers at the stable, an American who has left the country for a short vacation. As Knutas and his team wait for his return to make the arrest, the inspector takes a well-deserved weekend off with an old friend, and at the lonely cottage in the woods, the pieces finally fit together. But this time, Knutas has gotten too close. . . ."


In this book we get to learn the mail caracters even more. I love the way she describes them and somehow they feel like real people, very fast. But in this book, the rest of the story felt forced. And just as the first book it kept going and the "solution" were jammed in to the few last pages. Don't get me wrong. It's not in anyway a bad book. It just feels like the story with the mail caracters is well thought through and planned. But the "crime" is just mixed in there to have an excuse to write more about them.

The third book is called

" The Inner Circle opens with an international group of young archeology students sweating on a dig on the island of Gotland, uncovering a Viking fortification dating back over a millennium. They are a fun-loving lot, partying together every night, but the good vibe turns to horror when one of them, twenty-one-year-old Martina Flochten, disappears. Her body is found a short while later, naked, bled out, and hanging from a tree. Her injuries indicate that she is the victim of a ritual killing.
Inspector Anders Knutas investigates Martina’s acquaintances. Who was the mysterious lover she was supposed to have been meeting in secret and whom none of her fellow archaeologists have actually seen? What do the marks on Martina’s body signify? Is there possibly a connection between Martina’s death and the recent and unsolved brutal beheading of a Gotland pony? The pony was also bled out, and its head was missing---until it appears mounted on a stick outside the next victim’s house.
Inspector Knutas and his team work feverishly to catch the killer, but before long there are more victims, all of whom have been killed and mutilated the same way.
Mari Jungstedt integrates a healthy dose of Scandinavian mythology in this installment of her critically acclaimed series, and also addresses current issues on Gotland, while keeping up a fast-paced and intricate plot as Knutas closes in on the killer and the secret that connects the victims. This is Swedish crime fiction at its best: dark, atmospheric, and character-driven."


The more I read about the people in this book, the closer I feel to them. And, with an ending like this book has, I really need to stop writing to start book 4. This book feels more thought through than the second. The story is bound together better.
It's creepy. A bit gross at times. Just as it's supposed to be. I have to say I'm liking Johan Berg (awesome last name by the way) more and more. Ok, I'll shut up for now. Time to start number 4. (The killer art)

Guess it's fitting that post 2 is about shatter me, too. (and, uh, yeah. Shatter me #2)
Tahereh tells us the stuff here:

Email ThisBlogThis!Share to TwitterShare to FacebookShare to Pinterest
Labels: Shatter me, Tahereh Mafi, unravel me

Shatter me by Tahereh Mafi

"Juliette hasn't touched anyone in exactly 264 days. The last time she did, it was an accident, but The Reestablishment locked her up for murder. No one knows why Juliette's touch is fatal. As long as she doesn't hurt anyone else, no one really cares. The world is too busy crumbling to pieces to pay attention to a 17-year-old girl. Diseases are destroying the population, food is hard to find, birds don't fly anymore, and the clouds are the wrong color. The Reestablishment said their way was the only way to fix things, so they threw Juliette in a cell. Now so many people are dead that the survivors are whispering war-- and The Reestablishment has changed its mind. Maybe Juliette is more than a tortured soul stuffed into a poisonous body. Maybe she's exactly what they need right now. Juliette has to make a choice: Be a weapon. Or be a warrior."


I loved this book. And I guess I might as well face it. With 'the host', 'the hunger games', 'Divergent' and now this, among my favorite books, I think it's safe to say that dystopian books, are my thing. LOL  Can't want for the sequel.

The Pledge
by Kimberly Derting

The Inner Circle
by Mari Jungstedt